It took no more than 3 minutes to go from pre-monsoon rain to flooding. Inside the house. Because we just don’t have enough more problems in our lives right now. But this story has a good ending, at least for us.

Last night, E. fell asleep for a short nap on the couch. It was raining, the nice rains we enjoy in the early evenings almost every night. We often sit out on the patio with a Diet Coke to watch the rain, listen to the wind and remind ourselves how lucky we are to have a concrete roof over our heads. Suddenly, the tree in our neighbor’s yard started shaking violently. I thought it was pretty and tried to wake up E. but got a grunt as a response. A couple of minutes later, rain became a heavy storm, and three doors slammed simultaneously. That woke him up, spewing curse words.

I have been through intense weather in the US, the worst being Hurricane Ike in 2008. Regardless of the extent of the damage caused, at least we had notice, hence were prepared, especially closing, and in some cases, boarding up windows.

Rain is supposed to fall from top to bottom. Vertically. That’s the laws of physics. It’s gravity. But with the force of the wind, the rain entered the screened windows at a 45-degree angle and landed several few meters away. Four meters to be exact, I measured. In a matter of minutes we were flooded. We rushed to first close the curtains to minimize damage, then close each window. We have over 30 windows, each with an involved mechanism for opening and closing the lock. With the wind hell bent on keeping them open, E. got his fingers crushed more than once. More curse words. We unplugged all appliances and once everything quieted down a bit, we called Sathya and our maid to make sure they were not sleeping in mud tonight. She said she had a leak. “Leak not big, leak small”. Good.

Overview of the damage:

Once I knew we were safe and the house ok, I thought it was pretty cool. I was a minority in that opinion. E. wasn’t impressed with the potential damage to one computer, one kitten ran under the couch the second she heard the doors slam, and the other kitten was no where to be found until we walked around the house with a plate of Kitty Paté, which brought her out of her seclusion.

But we don’t live under a tent. 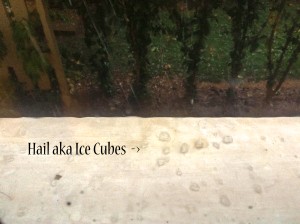 PS: If you’re reading this to assess the state of my mental health, you’re an idiot.