Haven’t you always wanted a monkey?

Another trip to France, another funeral. My grandmother passed away while I was there.

I avoided some of the scorching heat of May by going back home for business. Summers here are hot as hell. There, I said it: hot and uncomfortable. Summer is April and May. In Bangalore, it’s a dry heat and I am used to humid Houston. I have been in hot countries before, but there is something about India that makes it unbearable for me. Whenever I go outside, I feel like I am carrying 40 pounds on my chest. I almost passed out in Goa. I can’t imagine what it’s like in Delhi but will probably be able to tell you soon since we’ll be there shortly. The fact that the four air conditioning units in our house take turns breaking down doesn’t help much. We have been playing musical beds since summer started: one week in one bedroom, then the AC dies. Move to guest bedroom for a few days. Then the AC dies. Move back to master bedroom, etc… If the AC unit hasn’t been fixed, stay downstairs on the couch and bemoan the lack of efficiency of Western luxuries in one of the poorest countries on the planet. The irony isn’t lost on anyone.

Since India is a never-ending adventure for those who seek it, here’s what happened to my best bud while I was in France.

First, he spent an awful lot of time sitting on the couch, working, watching the Spurs games in the middle of the night (Go Spurs Go, ta ta ta ta ta dam), y’a know, doing the American thing. I told him to get his butt off the couch, and, lo and behold, after a week, he listened to me! On a bright and sunny Saturday afternoon, he sent me a text message saying he was on the scooter on his way to Nandi Hills. That’s a big mountain about 70 kms from home. That’s quite a ride. What’s a girl to do when her husband decides to ride that far away? Nothing but hope for the best. He texted me several pictures along the way. Nice scenery. He was having a grand ol’ time, proud as a peacock, which, quite appropriately, happens to be this country’s national bird. But India being India, nothing goes as planned. On his way back, he got a flat tire. In the rain. In a village. Where no one speaks English. But where they have cell phone coverage. Thank all the Indian gods for the massive cell phone coverage in this country! Waiting for our awesome driver to come to his rescue, he took refuge in a temple and was soon surrounded by dozens of people also taking shelter from the elements. Sathya came with his brother (who probably wanted to meet this crazy American!), who rode the scooter back, while E., soaking wet in the back seat, was being driven back home. Verdict: two nails lodged in the tire (“tyre” in India).  And Sathya is absolutely the best “thing” in our Indian experience.

It looks like the road to Nandi Hills is inhabited by hundreds of monkeys and they don’t mind posing for pictures. Those are some of the cutest pics I have seen (click on any to see them in bigger size). 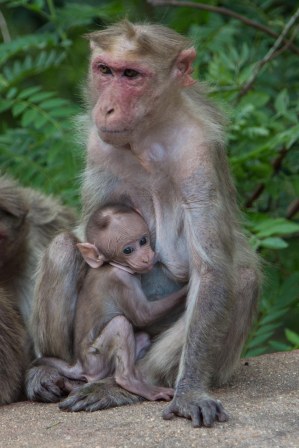 Searching for food, and eating the plastic bag too.

Now I am jealous, I want to see some monkeys!

1 Response to Haven’t you always wanted a monkey?