A primer in Chinese renters’ rights

Posted on December 5, 2016 by Kitty Vindaloo

Unlike many new comers to Shanghai, we did not have a problem back in July finding an apartment (money helps). What we have had is a problem holding onto the said apartment (money doesn’t help). We got “evicted” a couple of days ago, with a 48-hours notice to vacate. When you are given two days to move out of your apartment, find another, and move your belongings into the new one, in a foreign country, you freak out, you get mad, you threaten behaviors that could send you to jail in either country. Then you calm down, handle the situation like a mature adult, and later call your wife, who’s warm and cozy preparing for Christmas at home in Texas, to tell her what happened to you in the last few hours.

To add a little bit of spice to the situation, let me recap the last five days. E. flew into Shanghai on Tuesday. Before takeoff, he had the pleasure of waiting in the plane on the tarmac in San Francisco for three hours (the airline said it was mechanical. E. believes they were waiting for another plane to fill the first one). He gets to the apartment after a 12-hour flight (+ 3 hours of waiting = 15 hours on the plane), late in the evening, and there is no power. Nothing. It’s not just the heat that is not working, it is zero electricity. Why? In our apartment building, the electric bill is prepaid. Did we not pay enough? Did we underestimate the amount of units required? Did the refrigerator, which was the only appliance still on while he was gone, eat up all our units? Was there a problem with the fuse box?  Where is the fuse box? It’s night in China and nobody can help my buddy. Luckily we haul enough blankets around the world, and he has socks and sweatpants and sweatshirts with hoodies to survive the night. It’s not Beijing therefore it is not below freezing. It is, at night, around 40°F/5°C. In other words, it’s livable. The next morning he is being told that since he did not pay the bill, which he had been told was prepaid, his power was cut off.  A paper bill, of course, was never found in the mailbox.  With the help of his colleague (since we do not have a Chinese bank account yet) they paid the bill. We owe Kevin $12.00. All is good. For a few hours.

I cannot even go into details over the situation because I do not know them, nor understand them.  From what I can gather: ONE – The landlord puts their property for rent through an agency.  TWO – Back in the summer, we hire the agency to help us look for an apartment and sign all the paperwork.  THREE – The landlord is unhappy with the agency and fires them. FOUR – Trickle-down effect, we are “fired” too.

That’s how it works.

No matter what the landlord thinks of the agency, we had to rehire them. They told E. at first not to worry because they had about 20 vacant units in the same apartment complex and would be available the next morning to help him visit them. Overnight, the Chinese magician made 19 of those units disappear. He had a choice between one apartment in the same complex or another one in an area a few blocks away in a dull neighborhood. So, I got to visit the one apartment through WeChat Video, and helped decide between one choice and the same choice. In a sense we were lucky.  The agency sent five guys  for free, in an hour the old apartment was completely packed, and within two hours everything had been moved into the new apartment. Efficient. Again, here comes the amazing pleasure of having to unpack everything. The second time within a month.

Now, instead of having a view on traditional Chinese dwellings on one side, and on skyscrapers from the other window, we have view on a nice commercial street and the Fen-Shui pond in the complex. We have also dropped from the 16th floor to the 7th, and I am a bit concerned about the noise at night on the weekends. I will be there in a few days, and I will make sure to bring my noise canceling headphones! 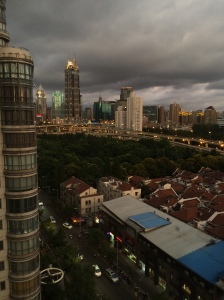 View from the old apartment during a storm

I do not claim to understand anything about Chinese real estate law, or renters’ rights, if there are any. What I do understand is that what happened to us is legal, yet unusual.  Renters are usually given a few weeks notice. We were not afforded that privilege.

My husband now says that our next step is to buy a condo in Shanghai. Owning real estate in China has never been, nor really is, on my bucket list.

What happened to the goood old Communist creed that landowners are evil?!