The Taj Mahal on Thanksgiving

Posted on December 1, 2014 by Kitty Vindaloo

A very last minute decision, and we got to see the Taj Mahal on Thanksgiving morning.

Because of his surgery, E. wasn’t supposed to get on a plane for another few weeks (you can follow his brand-new blog at BariatricVindaloo.com). But he got “cleared for take off” and we went to Delhi, he, for a conference, me as the wife-in-tow! Hence, I hadn’t planned the trip. I knew the Taj Mahal was a must, and then, since Delhi is the fashion capital of India, I wanted to go fabric, ribbon and clothes shopping. But germs decided otherwise: I got sick and was only able to venture a few kilometers away from the hotel. I blame myself as I have become complacent with the use of anti-bacterial wipes. I didn’t use one when I came back from the school on Wednesday, nor after the flight, and paid for it with a sore throat and an overall feeling of yuck. What a shame. But we liked Delhi and we’ll be back.

We met some great people. On the plane from Bangalore, I sat next to a wonderful man whom I started a conversation with. It got so interesting quickly that when the person with the middle seat arrived, I voluntarily surrendered my much coveted aisle seat so I could continue our chitchat! We talked about the U.S., food, Bollywood and religion. Yes, I ventured into the realm of Indian religion!

We also had dinner with an attorney E. works with, with his wife. They both lived in the U.S. for over a decade, and it was fun to listen to their experiences adapting back to the home country. What do they miss most from the States? Fresh air! Air pollution in this city in unbearable. You can see it. I really mean you can see the particles floating in the air. It shows on every picture we took.  And if, like I was, you are sick, you can feel them scratching every inch of your sinuses all the way down to the inside of your lungs. Not only it smells really bad, the simple necessary act of breathing hurts.

We stayed at a fancy hotel again, and for the first time in a long time, I felt seriously underdressed walking into the lobby. My kurta and leggings bought at Big Bazaar, the equivalent of Target, didn’t cut it. It is wedding season, and guests were wearing their best clothes. It was stunning, for women and for men. The embroideries were magnificent. The fabrics themselves were heavy, expertly draped. Since it’s colder up there, women do wear their pashminas. We tried to crash a wedding, but no luck!

Delhi has roads, real roads, well paved, with sidewalks, and without potholes. The more politicians you have in an area, the fewer potholes you suffer. Hence, since Delhi is the nation’s capital, the roads are pretty great. Road congestion was no more than New York during rush hour. The flip side is that we saw more street kids begging than in Bangalore.

Now about the main event: the Taj Mahal. It is located in Agra, a 2 to 3 hour drive south of Delhi. They have built a highway, nicknamed “the Taj Mahal Express”. There isn’t much to see on the way there, some agricultural land and a few workers.  We left at 6 am and I had brought my pillow. Simply trying to walk with my head held high in the hotel lobby while carrying a pillow, surrounded by people still dressed in their best attire even that early in the morning, was an experience! In the car, I was trying to get confortable but my pillow kept slipping. Our driver must have seen it in the review mirror, stopped the car and made me a bed on the far back seat. How sweet is that?

The site is very well organized. You can’t park close so you have a choice of an electric car, or a camel. That early, I was in no mood for a smelly camel! Prices differ for foreigners and Indians: 20 rupees for Indians, 750 for foreigners, a 1/37 ratio. Nothing new here. We paid for two “high value” tickets and got the luxury experience, which means we got to cut lines. We could have done without since it wasn’t crowded but I suspect that on busy days, it would be worth it. And again, lots of people stared at us, took pictures of us, so we took pictures of them! 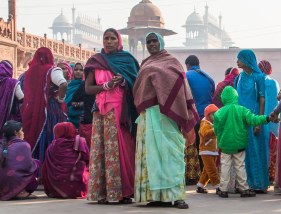 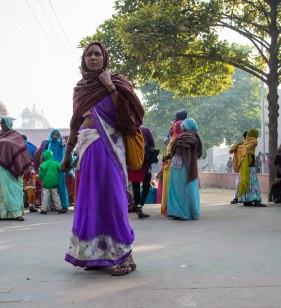 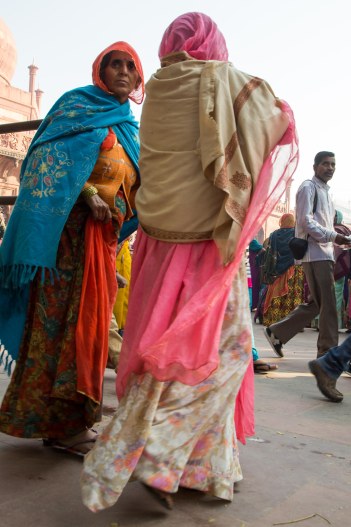 The Taj Mahal is splendid. It’s beautiful. It’s stunning. But do you think they will revoke my visa if I say I expected more? It was as I had imagined, but I wanted to be blown away. I wanted it to be beyond my expectations. I wanted it to shine and shimmer and blind me with colored sparkles from the semi-precious stones.  In my mind, they were all precious stones, sapphires, rubies and emeralds, when they are mostly semi-precious, as in lapis-lazuli, jade and onyx. The twinkles we saw came from abalone shells. It looked fantastic!

We had a young guide, Salman, who was dragging us from place to place, talking my ear off, while all I wanted to suck in the beauty and the peace. There were things he stated that didn’t make much sense to me. For instance, there are 22 steps leading to the inside of the tomb, one step for each year it took to be built. How did they know how long it was going to take? He mentioned some stones that had been imported from New Zealand, though I have not been able to verify this. The good thing is that I am usually bored by long historical explanations when I don’t have the basic knowledge to place it. So it was fine. His delivery of the information was in questions-answers. “Who built the Taj Mahal? Shah Jahan. And who was the father of Shah Jahan? Jahangir.” I have seen similar methods of teaching at my school. What he never mentioned that the tomb, although a testament to undying love, was build with tax payers money (as per my History of India book)!

I had two wishes: I wanted a silly lovebird selfie with the Taj Mahal in the background, and I wanted a picture sitting on “Lady Diana’s Chair”, you know the one! As a photographer and a Lady Di fan (yep!), I knew what that iconic photo looked like. I knew the composition. I knew our guide was making us stand on the wrong bench. But I believed him. If I had done my research in advance, like I usually do before a trip, I would have known.  But deaf to my protests, he took a series of ridiculous pictures of us, standing on a bench, pinching the top of the dome.  Do you know how much I dislike these types of shots?  So I played stupid and started dancing Bollywood style for a few seconds, attracting laughs from visitors. If someone has the video of it, please send it to me! Another guide was ordering a man and woman to embrace for a shot, though they kept saying “We are not together, we are not a couple!” as the guide kept snapping!

But next time, hopefully with Sally, we will take our time, I will to linger in the gardens, alone, do more people watching, and stare at this mesmerizing symmetry.

And take my selfie!