What on Earth possessed us to go to Goa in April? Cheap rates that’s what. And you know why it was so cheap? Because it’s the hottest place in the entire universe! I know, the hottest is Death Valley, but when we drove through Death Valley, we were in a cozy air conditioned car, not in a hotel with dozens of power failures a day, and night, when the AC goes Kaboom! It was summer, as summer in India is April and May.  We can handle Texas humid summers, but I nearly passed out in this dry heat.  Nonetheless, we truly had a wonderful time.

Goa is pretty. Kochi was pretty, but Goa is prettier. Let’s face it: Bangalore is ugly (my opinion). Don’t get me wrong, we love that place (especially its climate now that we have experienced, though partially, Indian heat) but the development of Bangalore was not followed by adequate urban planning. Bangalore is a city on a mission, an economic and technological mission. Goa however is still a small town, with clear mementos of its Portuguese past, with names such as D’Souza and Fernandez, and clothing clearly inspired by old Portuguese fashion, including “normal” dresses (see picture of the woman with the dog below). Of course, there are many beautiful old Catholic churches everywhere. Many are being restored.  Shoes are once again optional. 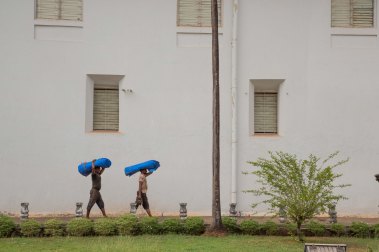 Once again, we dream of retiring in one of the thousands of a Mediterranean style old houses, painted every color of the rainbow, especially yellow, purple and red.

But there are some less beautiful residences, thanks to the proximity to the sea.  We had seen similar moldy buildings in Mumbai, even in very posh neighborhoods.

We rented a scooter, and also hired a car to show us the touristy places.  As is common practice in India, the dashboard of the car is decorated with religious figures.  We use Ganesh.  This time it was Mary.

Calangute and Candolim, the world famous surf beaches, had thousands of people but only a handful in the water, Shrek and his castle (so much for “no photography”, I only saw the notice when I got home!), but no surfers.

The hotel was all inclusive, a rarity here. Half the clientele was European, the other half Indian, some NRI judging by their accent. Remember when I was complaining about how some foreigners dress? Indian women cover up. A lot. Even in the pool. We have seen many women, as well as little girls, wearing bathing suits that look to us more like a wetsuit designed for scuba diving than for splashing around in a pool, covering everything from the elbows down to the knees. At the beach, we didn’t see one woman who wasn’t fully covered up. If I think that some foreigners look indecent, I wonder what goes on through other people’s minds.  We recently saw a young woman walk out of our compound wearing short-shorts and a cami.  No.

We met a few nice dogs, really nice dogs.  Some strays, some pets.

Bangalore has thousands of dogs, stray dogs, but they aren’t particularly friendly. They hang around food places hoping for crumbs but don’t seek human contact besides that. Goan dogs are much friendlier. Since the risk of rabies was pounded into me by the company nurse back in San Diego, I breathed deeply in apprehension when a few approached us on the beach, walked around and sniffed us. We carefully petted them on the head, and they absolutely loved it. That’s all they wanted, a bit of attention and a  scratch behind the ears. The dog above on the beach, whom we met several days in a row, we called him “BB”.

Those stray dogs are welcome anywhere.

When was the last time you saw a dog walking into a basilica and take a nap between the pews?

2 Responses to Goa in April