There is a little monkey hanging out at the hotel.  He’s the only one.  And he’s so cute!  We first saw him around the pool, jumping, running, chewing on leaves, and I believe he was being a show off.  He was following the pool attendant, about 20 feet around him.  Of course, us westerners, as well as a Japanese couple, fawned over the little creature, though careful not to get too close.  Monkeys are cute but I know they can get aggressive and they bite: rabies, remember!

We asked about the monkey, and were given several versions, so here is mine.  They had a family of wild monkeys on the property: the mom, the dad and a baby.  Unfortunately, there was an accident about 3 months ago, and both adults died.  The baby stayed around, and the staff is, underhandedly, taking care of him (or is it a girl?).  I was told that they were trying to remove him from the grounds for safety reasons.   They looked a bit surprised that we would be so interested in a lowly monkey, but we then were given reports as to where the monkey had been seen last.

I asked A. (name withheld for privacy reasons) if the baby monkey had a name.  He said no, and gave me a look that I interpreted as “who would do such a silly thing as naming a wild monkey”.  But 2 minutes later, he approached me and said softly: “I call him Chotha”.

It means “small” in Hindi. 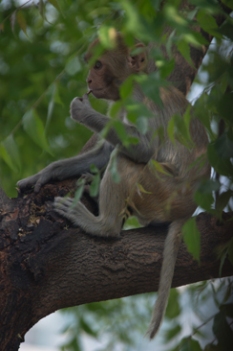 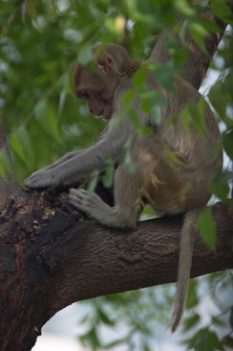 Can you see him?

This entry was posted in Uncategorized and tagged Falaknuma, hindi, Hyderabad, India, monkey. Bookmark the permalink.