Being an expat is not all fun and games (hearing about your father in the hospital through Facebook isn’t ideal), but it’s not exactly horrible either.  One of the perks for many of us is the ability to travel to places we would not have visited otherwise.  It’s actually sometimes complicated, in a funny way, to keep in touch with my girlfriends, because we are always out and about.

When we accepted the assignment, I made it abundantly clear to E. that I had three travel requests: 1- Australia, 2- Thailand, and 3- The Maldives.  Numbers 1 and 2 are still a dream, but Number 3 has been bagged.  And I now have visual proof, admissible in a court of law, that I married a dimwit!  I married a guy who chases sharks.  Yes, sharks, as in Da Da Da Da Da Da Dummmmm.  Not once, but twice, and on purpose.   I have pictures and he has videos.

Let me put this into context.  The Maldives are astonishingly beautiful above and below sea level.  The islands are of white sand, crystal clear turquoise water and coconut trees.  Not much else.  The ocean is brimming with hundreds of colorful fish.  And sharks.  There are plenty of sharks.  When we picked up our snorkeling equipment, they explained the different types we may encounter and reassured us that most are quite inoffensive.  Yeah right.  I don’t care how calm and skittish reef sharks are, they look freaky.  They swim in an unmistakable slow and stalking way.  Their bodies are floating horizontally instead of vertically, like any good fish should be (rays don’t count here, they’re cool).  Seeing your first shark gives you goose bumps and makes you want to scream for help.  But would you believe that there are so many that you actually get used to seeing them swim around, and go “bleah” when you see one?  That “bleah” however quickly transforms back into “OMG” when one curious shark comes directly at you, so close that you could touch it, looking at you directly in the eyes (quick, are we supposed to hold their gaze or look down, I don’t remember, ok it’s got black stuff on its tail so it’s a nice one, I will just close my eyes) and spends a few terribly long seconds circling around you a couple of times.  At that point I had conquered my fears, stood as still as I could and took pictures.  There, here’s my curious shark and my hubby in the background.  Chomp.

It is a very sad state of education when you can name all the different dinosaurs, which have been extinct for millions of years, but can only name fish as in “Hey, look, Nemo”.  Or “there’s, Gill”.  “Ohhhh, Dory, I like Dory”.  Pathetic.  So, here’s Nemo and his family hiding in an anemone, here’s Gill, the magnificent morish idol, and of course Dory.  They didn’t teach me underwater photography in photography school, and it’s harder than it looks!  The GoPro was much easier to use, until it got wet and died. 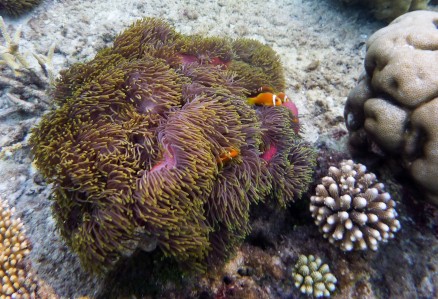 E. spent a bit more time in the water than me (I had a John Grisham to finish while eating my complimentary mango sherbet on the immaculate beach) and when he was not chasing sharks, he was mistaken for fish food, befriended a turtle that swam with him for about 15 minutes and got a close encounter with a moray eel, though I suspect he wasn’t aware of it until we looked at the footage!

Video of the fish mistaking my husband for food:

At the Koodoo airport on the way back, when they couldn’t identify this strange object appearing on the x-ray of the luggage, instead of taking everything out in an all powerful arrogant TSA way, they simply asked “Could you help us and tell us what this is?”  It’s nothing but a big pack of D batteries.  That’s how nice and honest people are around here.