When tracking tigers, the main clues are poo, paw prints, and the communication between other animals. I don’t have any pictures of tiger poo (a bit of decorum please!) but here is a fresh tiger paw print.  Unfortunately, it didn’t lead us to a tiger.

We did not find that print in our backyard, as the only feral animals here are normal cats. We went on a mini safari in the Nagarhole Reserve. It’s pronounced Nagar-holay, not Nagar-hole.  It was one of the best trips we have taken so far.

The park is a 6-hour drive from home. We opted for a two-night stay at the Kabini Jungle Lodges and Resorts, and were as usual charged foreigner prices. This legal discrimination in pricing is getting old. I know, bla bla, we have more money, but still… 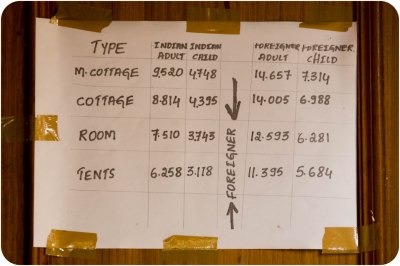 In a 48-hour span, we went on 4 mini safaris, three on land, one on a boat, about 3 hours each. Two started at 6:15 in the morning. We broke into fits of laughter when they announced a 5:45 wake up call, which is closer to our bedtime than wake-up time. Even Sathya who had driven us there thought it was really funny.

Here, the wild animals free to roam, it is their home, and you are on their turf. At the Bannerghatta Park that we visited last year, only an hour south of Bangalore, the animals are in captivity, albeit on hundreds of acres, and are fed and cared for if they become sick or are injured.  In Nagarhole, they are truly wild, free, unchained, untagged mostly, barely tallied.  But that literally means that “you eat what you kill” and many animals die at the end of summer when there is no water and little to munch on.  To stay alive, their alternative is to roam through the villages and look for humans as food.  Man-eating tigers are a real threat to the local communities.

The main attraction of the Nagarhole Park are its big cats: tigers, leopards and panthers. We saw one leopard only, but it was well worth the trip.  A leopard in the fog, right after sunrise is unforgettable.

We also saw hundreds of spotted deer, tens of cormorans, 3 mongooses (or is it mongeese?), many langur monkeys, several gaurs (big buffalo like creatures), wild hogs with babies (no Edward, this ain’t Texas, you can’t shoot them!), a couple of sambar deer and a barking deer.  We were told they bark like dogs, though this one took off like a bunny rabbit. 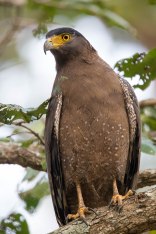 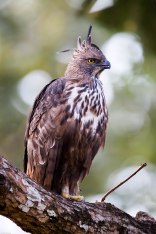 There were thousands of birds, including peacocks, though I cannot name most of them. But I now have a favorite bird, the kingfisher, a tiny little blue thing, just the prettiest bird I had ever seen.

Lost in the trees

So, how do you track a tiger in a tiger reserve? “Here kitty kitty kitty” gets you nowhere, we tried.  Instead, use your senses, mainly eyesight, and hearing. The guides accompanying us were amazing. Of course they are professionals and do that several times a day over the course of several years, but seeing them at work is amazing. We were riding in a jeep, on dirt paths, often in the fog, and they would stop on a dime, point and say “crested eagle” or whatever creature they had seen. For birds, they recognize the song. For tigers, they listen to the other animals talking to each other. When a big cat is on the ground, monkeys sound an alert, then carried around by deer and birds. Guides can identify if the cat is a tiger or a leopard: as tigers cannot climb trees as fast as leopards, they are less of a threat to monkeys. Therefore, the rallying cries of monkeys are louder and longer when they sense a leopard.   Guides can also tell you in which direction the cat is walking, once again by listening to location of the forest chatter. Once a tiger or leopard is spotted on the ground, animals are on high alert and it’s clearly visible even to untrained visitors like us. First, deer will have their ears up and monkeys will go to the top of the trees.   If the tiger is really close, all sound and movement stops until it leaves, and the forest becomes again one giant cacophony of chirps and grunts.

Elephants are my second favorite. One mother elephant fake charged our jeep when a younger elephant was too intimidated by us to cross the path. In spite of our guide telling us “Don’t worry, take photo, mock charge”, I felt none too safe.  In the Jeeps, there are no weapons of any kind, even tranquilizers, as shooting at one of these animals carries an automatic life sentence.  However, once every few years, when a tiger has eaten one too many villagers in a short amount of time, the government allows for it to be killed.

And to conclude with a smile, we had a close encounter with a thief, the common bonnet macaque, the ubiquitous wild monkey of South India. Listen carefully and you can hear me chuckle like a goose while he sips our drink under the “Do not feed Monkeys” sign.

2 Responses to Tiger poo is black