Crayons, cows and a kitten

On Friday, a friend had to wait for us at the gate before she could come to our house.   Yes, we live in a gated community, and that means there is a gate.  With gatekeepers who wouldn’t let her in, especially since she came through the “wrong” gate.

So, hop on the Vespa we did and went to rescue her.  It took her a couple of minutes to walk to her car and follow us.  During those 2, maybe 3 minutes, the ladies working at the construction site next to us started engaging us, with hand gestures and giggles and smiles. I waved back, smiled and giggled and jumped back on the Vespa to go to our comfy home.

Everything here is done by hand.  EVERYTHING.  The digging, the carrying, the sifting, the lifting, the making, the everything.  I have not seen a bulldozer in a year.  You know the nice bricks and cinder blocks you find at Home Depot? They are made here, by hand, in little villages close to us. If a building is under 4 or 5 stories high, there are no cranes.  I refuse to take pictures of the situation, of these people.  I do have a few that were accidentally taken while “shooting from the hip” on the scooter, but I am not going to post them here.  The only one that I am allowing myself to post was taken by mistake a few days ago while I was crossing the street and answering a call at the same time.  Stupid phone, that will teach me to multitask!  It shows a man standing in a ditch, hand-dug over several days, using a miserable pickaxe and a shovel.  The dirt taken out is then put into what is best described as a large plastic saucepan about 2 feet in diameter, then often hauled onto a woman’s head. 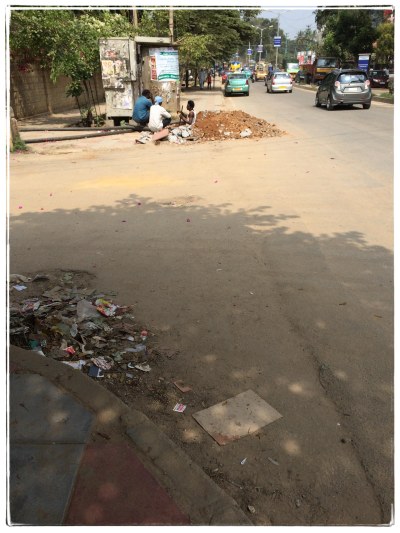 They don’t use wheelbarrows here.  I have seen maybe one or two.  They have women instead.  About a week ago, I was standing on the side of the street next to my school waiting for Sathya to come and take me home.  They were fixing the sidewalk, which meant first breaking the half-broken pieces of concrete to replace them with non-broken ones. A young man hit the concrete with a sledgehammer. Once. Twice. I figured out he needs to hit it in the exact same spot to produce a fissure, otherwise it is wasted energy on his part. Then pieces broke off, from the size of a hand to the size of a head. He set them aside. Two women picked them up, put them into a saucer as described above, and hauled them 5 meters away, creating a big pile of concrete pieces that will stay there for a long time. As in months. They took a few minutes off their job to stare at me and laugh and wave. The usual story, the highlights of my trips here. That is a woman’s main jobs on construction site, to haul stuff from A to B, carrying it on her head, in the plastic plate, with a little towel as a buffer between scalp and plastic. The towel also helps balance it a bit better. Women also sieve sand. I do not know why. This, I have a picture of, found after much cropping of something else I was shooting.

But back to my neighborettes construction workers. These women, unlike all the others I see daily, I had an idea where they live. Yesterday, we went looking for them. I am not sure we found these exact women, but we found a slum about 500 meters from the gate. Here we go again, a slum… I though we were going to find a camp with blue tents, but we found huts made out of cinder blocks, with dirty kids and black puppies running. I swear, this is the first time we get so close to the India described in the documentaries I mentioned last time.  We had prepared a big bag of goodies, and gave it to a very grateful mother who was cooking in front of her home.

That little girl’s dirty face haunted me last night.  Since I couldn’t sleep, I ended up on Google Earth this morning around 5 am and checked every single corner of the outside of the compound. Today we went on a ride again but stayed very close to home, literally on the other side of the compound wall. But you have to go a few kilometers on the real road and then onto dirt roads to get back so close.  We got stuck in sand, E. almost killed us by driving over a rock, we saw cows running away (cows look funny when they run), and an orange kitten (Ah! Proof of the rock at 0:12 on this video and of the cat at 3:37, on top of the wall on the left). No slum there, just little homes.  We met two kids, Santosh and his buddy, about 9 and 7 years old.  Aside from rice and water, I now also distribute crayons. Don’t ask why, I just do. They each got a box of crayons, plus one for the little kid running towards us. Santosh asked me “Aunty, you have food” with the habitual hand to mouth gesture that each time kills you a little bit inside. I apologized for only having rice, and not something fun, like cookies. And you know what? With a big smile, he took my 1kg of rice, and thanked me.

And then he asked “When are you coming back Aunty?”

1 Response to Crayons, cows and a kitten