Dubai, not too shabby

Dubai is the opposite of India.

Dubai is clean. Dubai is rich. Oh, so rich.  A 800 Series BMW is a taxi, a poor man’s car.  A Lamborghini starts to show your true rank.  You drive a Porsche?  I am sorry you fell on hard times, it will get better soon.

Traffic is orderly.  I guess when you have a half million-dollar car, you don’t want people swerving every which way.  They have highways, real highways, with multiple lanes.  When one Indian taxi driver heard us lament over not being to go over the speed limit in Bangalore, he pressed the pedal to 80, 90, 100 and 120 km/hour, and all of it downtown!

My kind of horse

There is not one pedestrian on the streets or on the sidewalks.  This may have to do with their state of the art metrorail: on time, efficient, clean, air conditioned.

They have skyscrapers everywhere.  This isn’t surprising since the Burj Khalifa, the tallest building in the world is in Dubai.  We saw it.  We wanted to go all the way to the top, at least to the “topest”, but it is such a popular attraction that you need to make a reservation the day before.  So we stayed at the bottom, at the mall.

They have extra luxurious malls, and in these malls they have shoes.  Oh, do they have shoes!  The top brands in the world, shoes I had never seen in real life before.  Shoes I will not, nor would ever wear.   Shoes that ain’t made for walking!  I think a quarter of their malls are shoe stores.  I walked into a Christian Louboutin boutique, just to look.  Those shoes are more expensive than our Toyota!  In the malls located in the middle of the desert, they have ski slopes and penguins.  Proof?  Here you go: 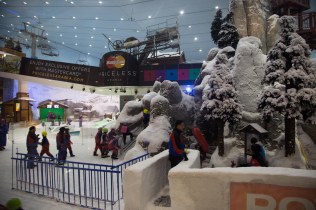 They have hookers.  Of all sorts.  I got to meet three of them in a bathroom, nice ladies, nice shoes!  Gender?  Unspecified.  At the hotel, we saw a scene between a young East European girl and her sugar daddy as the receptionist made the mistake of giving them a room with twin beds, since she assumed they were a father-daughter team.

They have beef.  Since we moved to India, we have become de facto vegetarians.  You absolutely can find beef in Bangalore, in meat shops for expats as well as cheaper places for locals.  People often believe that since the main religion is Hinduism, beef is nowhere to be found, but it’s not like Saudi Arabia and pork.  Muslims eat beef.  Christians eat beef.  Some Hindus eat beef.  People of all religions in Kerala eat beef.  So beef is available.  But my stance has always been that unless a food item is common in a country, I won’t eat it.  Why? Experience.  We have had beef here in fancy restaurants, but it’s never been anything to write home (or in a blog) about.  Not bad, just blah.  We have ordered chicken in “normal” restaurants and half the time, we have had to chew on things we Americans don’t like to chew on, such as little bitty bones and tendons.  When they cut up a chicken, it’s chop chop chop, no use of a pairing knife!  But back to beef.  Since Dubai caters to the very rich, and many of them, they import the finest ingredients.  They always state where the beef is from: Australia, Japan or for cheaper, the US. I admit, I had to go to Dubai to have the best steak of my life.  My Texan heart still isn’t over that.

If you’re anyone in India, you have to have a presence in Dubai.  Many Indian actors, starting with Amitabh Bachchan (the equivalent of our John Wayne if he were still alive and acting) who’s got his face plastered on a 15 story building.  I don’t even remember what he was advertising.  Shahrukh Khan is buying a place on the fake palm beaches.  Hrithik Roshan’s soon to be ex-wife is opening a store there.  If you’re rich and Indian, you spend time in Dubai.  I read that their underworld is also run from Dubai.

However, since 53% of the population in Dubai is Indian*, mostly from Kerala, I got to feel home in more ways than one.  We went to the Gold Market and all the sellers were Indian.  A lot of the staff at the hotel was Indian.  Since I often dress Indian style when it’s hot, wear Indian jewelry, and I do the Indian headshake quite well (if I may say so myself!!), I get smiles.  Usually a double-take and then a smile.  Indians are treated like crap in the UAE (as per many news reports).  You could feel that they were happy to be acknowledged, that someone for a few fleeting minutes was talking to them about home, about who they are, where they’re from, why they are here: money.  All the Indians we talked to go home only once a year.  So they work far away from home to send money to raise kids they hardly know.  I tipped our last driver in rupees, he thought that was hilarious!

I have said it and I will say it until the day we leave: I love India for its people’s warmth.  My impression is that people in Dubai are so busy being seen and spending money that they don’t see anyone.  Yet, I still wonder where “normal” people live in Dubai. 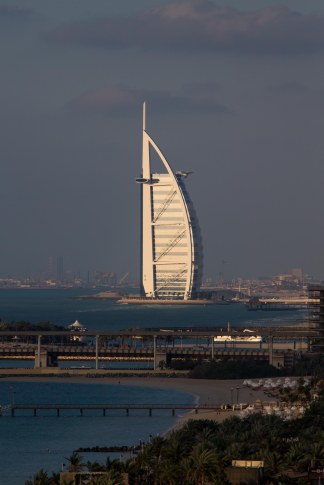 Thanks Steve from the other side of the Arabian Sea for a wonderful trip!