Public urination is probably one of the funniest, shocking, embarrassing, cultural clash that a westerner can see in India.  It’s everywhere!

I was ready to look the other way and accept it as a cultural specificity of the country until someone told me that cities are now taking a stance against it.  In rural areas, peeing in the sugar cane fields is a bit different from peeing in the street in a traffic jam.  You don’t believe me?  There, I have proof, look at the man in the white shirt who just parked his motorcyle:

One could argue that traffic jams are an attenuating circumstance.  But have you ever seen a Los Angelino stop on the side of 101 and drop trou?  No.

Bangalore’s walls have signs everywhere stating that public urination is illegal. It’s obviously not enforced, though I have heard that it’s ok to “shame” the guys by pointing at them, or banging on stuff to make them stop.  The signs are even written in several languages, so your only legitimate claim would be illiteracy (which is low in Indian cities). 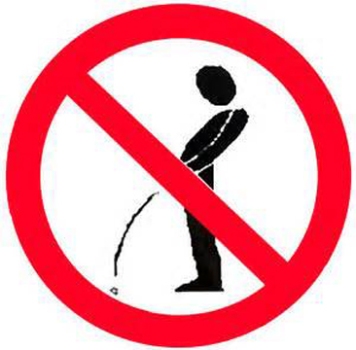 And then there’s this guy.  He was a just few feet away from us.  I blacked out his face, because, who knows, he may be working with E in a few months!

And women? I was told, and I quote: “we learn to hold it”.  Another strike against Indian women…